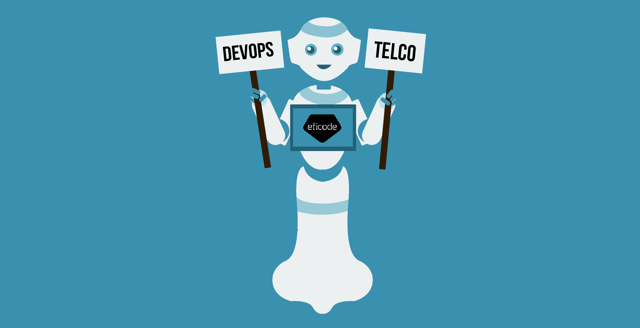 Today, Eficode is announcing that they are hiring a world leader in telco DevOps, Sami Anttila, to take DevOps to the telco industry worldwide.

On Tuesday 9 July, Eficode announced that they are putting their money where their mouth is by hiring a world leader in 5G DevOps to take DevOps to the telco industry worldwide. Eficode has worked with all the major players in Finland such as DNA, Nokia, and Elisa.

Eficode has hired Sami Anttila as its Vice President of 5G DevOps. Anttila has 20+ years of experience in telecommunications and has worked with very many of the major global operator over the course of his career. He was previously the Head of the DevOps Center of Excellence at Nokia. A ‘Center of Excellence’ is a best practice methodology which pushes the cultural and technological changes of DevOps into the far reaches of an organization. Most recently, Anttila held the position of R&D director in Nokia’s 5G network product development.

”We can now walk side by side with communication service providers on their digital transformation journey in this era of automation. Eficode has the world-leading DevOps capabilities, experience, and solutions to help telcos succeed. This is a track record you can trust,” comments Sami Anttila.

DevOps was created to solve the headaches of enterprise IT. Thanks to megatrends like virtualization and 5G deployment, the telco Cloud transformation is accelerating rapidly across the globe. The same DevOps techniques and methods that fueled the disruption of IT and enterprise business some time ago are only now opening up to the telco equipment and service business.

But cookie cutter DevOps is not what the telco industry needs. Instead, this era calls for unmatched technological expertise hand in hand with a deep understanding of customer business. Stringent regulations, a complex value chain, and distributed network topology are but a few factors that shape DevOps in telco into a unique sport.

“Combining the DevOps market leader position of Eficode with insightful telco capabilities is a winning combination. Our experienced telco team will be focusing on consulting and advising telcos on transformations that leads to results quickly,” tells Heikki Hämäläinen, Eficode’s Head of DevOps.

Eficode is planning to help telcos identify the right DevOps strategy including choosing a DevOps platform, or software production line, one which is fully integrated to their specific business environment. Test automation solutions, a key component of DevOps, and refined processes that will slash the long acceptance test cycles that have haunted telcos for years, will also be on the cards.

It’s exciting times for DevOps and the telco industry, with global communities more interconnected than ever before and expecting the fastest possible service. With this new investment, Eficode is poised to become the preferred partner in this space for Communication Service Providers.

A note from an Eficode telco client

“We wanted continuous integration (CI) and delivery (CD), which means a functional publishing pipeline and automation for developing code. An agile operational culture has been built around this pipeline, enabling tens of teams to function actively, without problems or system violations. As a result, our IT development has achieved both predictability and a high rate of change,” tells DNA’s change and release manager, Mikael Kuisma.

Eficode is a DevOps, software, automation, and design company with offices in Finland, Sweden, Denmark, Norway, the Netherlands, and Germany. Eficode is building the future of software development and digital services with almost 300 experts.

Since 2005, Eficode has been the trusted advisor of customers wanting to become better at creating software. The company was an early adopter of DevOps in Europe.

Discover Praqma, a Scandinavian IT consultancy which became an Eficode company in May 2019!

Software production lines are a set of interconnected tools that software development teams use daily. New features and code changes move from tool to tool through all stages of building software, such as requirement management, version control, and quality assurance. Automation strips repetitive work from the process and reduces the risk of human error.