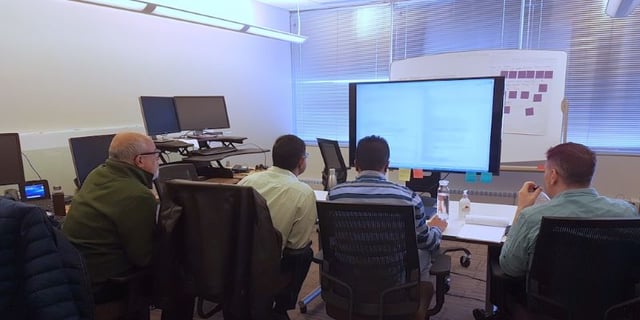 How does a Technical Agile Coach improve work in a development team? When Llewellyn Falco asked me to pair with him at a client I jumped at the chance to see how effective mob programming is for introducing technical agile practices.

Day one: head first into the mob

My first day as a visiting Technical Agile Coach begins with coding, in a mob. All the developers in the team and I enter our names into a mob timer. It will prompt us to switch roles every 5 minutes, so we will all take a turn at the keyboard. Llewellyn takes the facilitator role, sitting at the back. I find mob programming is great way to get to know a team and their codebase. After only a few minutes, I take the Driver role, which forces to very quickly pick up what’s going on. I need to understand both the current task, the IDE and the particular code we’re working on. The Navigator prompts me and the whole team helps me to find where to click and what to type.

Llewellyn has worked with this client on and off for half a year, and he was here all the previous week. This team has quite a bit of experience mob programming with him and a couple of other visiting coaches. Llewellyn gets involved facilitating the mob from time to time, usually to draw our attention to some improvement we could make in the code, or in the way we’re working together. When the team is stuck, or going in the wrong direction, he will step in and take the Navigator role for a while. That can happen when we’re doing a tricky refactoring, or if he spots we aren’t taking full advantage of our tools.

After 90 minutes the team has to go to their stand-up meeting. Usually we’d mob for about 2 hours with a team, but today we have a longer breathing space before the Learning Hour. Llewellyn and I take the chance to discuss the challenges this team is facing and how we can coach them more effectively when we meet them again tomorrow. Later this week he’s going to get me to take the Facilitator role and he’ll be in the mob instead. Next week he’ll fly home and leave me here for a week coaching by myself, so we’re already preparing for that handover.

The Learning Hour is a fixture in the calendar of everyone in the department. It’s one hour devoted to learning new techniques in software development, every day, led by Llewellyn or a visiting coach like me. Not everyone can make it every day, so the planned topics are circulated in advance with an indication of whether it’s a coding session or not. When it’s coding not as many managers/scrum masters/product owners turn up. Actually some of them do enjoy attending these more technical sessions to get a better insight into what challenges their developers are facing.

The lesson I’ve decided to begin with uses the Tennis Refactoring Kata, an exercise I’ve done many times with teams. I am hoping it will be fun and not too difficult, especially compared with the production code they are used to. The exercise has comprehensive unit tests that quickly fail if you make a mistake. The developers aren’t used to having that, and they soon find they like having fast feedback on the accuracy of their work.

Lunch is next up, and it turns out I’m not eating with Llewellyn. He’s set me up to go out with one of the developers from a team I won’t otherwise be working with. It’s a very deliberate policy Llewellyn has to help me to get to know the wider organization outside of the teams I mob with. He’s found that daily one-on-one chats with key people preferably in a social setting, is an effective way of becoming well-connected in an organization. Today it also gives me an opportunity to offer some career advice to an ambitious developer in a similar position to where I was ten or so years ago.

After lunch Llewellyn introduces me to a second team that I’ll be mob programming with, then leaves me to it. He’s confident this team is working well together and it will be straightforward for me to facilitate without him. We get stuck straight in to some front-end development work, improving a new account creation form. My javascript is a little rusty, but I find that’s not really a problem - they know their tools. I just need to keep an eye on how the mob is running, and think a little outside the box. I spot that what they’re doing will likely break some of the automated GUI tests, so we have a chat about how to handle that.

In the meantime, Llewellyn is working with a different team who are new to him. He begins teaching them the basics of mob programming, and getting to know their specific challenges. A future visiting coach might get to work with them once they’re up to speed.

Managing up and down

At the end of the session, we take a short break together and discuss how things are going. We have a little slack in our schedule, and Llewellyn spots one of the senior managers having a coffee. He takes the chance to greet him and book a short meeting the following day. Llewellyn’s heard there are plans afoot to break apart some of the teams, and he wants to ask the boss to protect a particular team from that reorganization because they are really starting to gel and mob well together.

For the third mobbing session of the day Llewellyn and I are pair-coaching again. It’s similar to the first session. All the teams we’re working with are really struggling with code quality and lack of automated tests. Even if ostensibly we’re working on adding a feature, most of the time we’re addressing code smells and adding unit tests.

The last thing Llewellyn and I do before we leave for the day is send a very short email to the department managers - the people authorizing our invoices. We write one sentence about each mobbing session and the learning hour, summarizing what we’ve done. It makes our work more visible to the decision makers.

Moving in the right direction

I’m impressed with how much Llewellyn and the other visiting coaches have already achieved with these developers. Most people have a positive, curious outlook, and consider learning new skills to be a normal part of work. Llewellyn will often pause the mob timer, pull out his laptop, and spend five minutes showing some relevant presentation slides. Some of the developers here know certain refactorings so well I find myself learning techniques from the teams not just from Llewellyn.

Optimising for when we’re not there

That’s not to say there aren’t problems. The codebase is still large, badly structured, slow to build, and lacking automated tests in many areas. Many developers in the mobbing teams are relatively new to the company, and most have little previous experience of Test-Driven Development or refactoring techniques. However, their starting point isn’t what’s important, the crucial thing is that they are continuing to improve and learn. What we’re doing here is creating momentum in the right direction, teaching skills and strategies so people can continue to make things better when we’re no longer present.

The wider organisation is also just beginning to adopt Agile practices and DevOps, and it’s not working smoothly yet. Many teams are still sitting in cubicles. The test, build and deployment infrastructure relies too much on manually executed steps.

There are several other agile coaches here at the same time as Llewellyn and me who are more focussed on improving process and product management. Later in the week I attend a sprint demo where there is much talk of A/B testing and hypothesis-driven development. People seem really keen to understand their customer needs and to verify they are building the right thing. The thing is, the starting point is less important than the direction of travel.

After a week of pair-coaching I feel confident I can pick up and continue Llewellyn’s work with the development teams at this client. I’ve got to know the people, the particular challenges they face, and have a structure in place that will let me continue the changes Llewellyn is initiating. I’m actually quite surprised how smoothly the handover has gone.

Not many coaches are generous enough to invite visitors to pair with them. Llewellyn has a whole list of people he’s inviting to visit in 2018, and I feel lucky to be one of them. It seems to me that everyone’s a winner. Of course Llewellyn wants to show off and spread his coaching methods to the visitors, but also to learn from them and get their feedback on his work. At the same time the client gets the benefit of teaching & advice from many different visitors. They do have to pay two coaches rather than one during the week we overlap, but having such a smooth handover gives them the ability to get more weeks of coaching than Llewellyn could provide by himself. So far the client seems to feel it’s worth the additional expense.

Taking what I’ve learnt home with me

I plan to start recommending this style of Technical Agile Coaching to my clients back home in Sweden. For a start I really enjoy coding, mobbing and teaching all day, but more importantly it seems to be more effective than what I’ve been doing until now. For years I’ve used Coding Dojos to teach the theory and practice of TDD, but all too often the initiative fizzles out and the dojos stop happening when I’m no longer there.

I think this combination of daily mob programming sessions with a learning hour is particularly effective at teaching both theory and practice. The lunches, the presence of other agile coaches, and sending daily summary mails connects me better with the wider organization. This has been a really valuable two weeks for me. I feel pair-coaching with Llewellyn has taught me an effective way to introduce technical agile practices and change developer behaviour for the better.