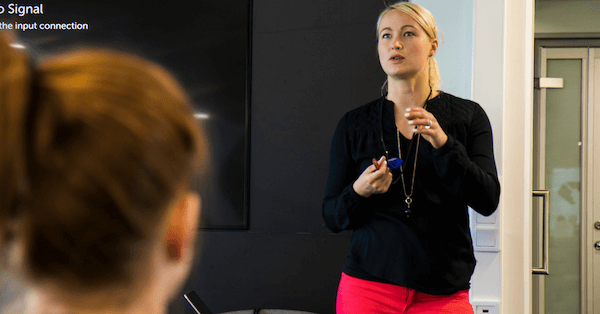 Irina Nordsrtöm, Eficode's HR-manager took the leap from the industrial field to a software company and has been positively surprised by many things at Eficode.

- It made me speechless for a while, when whilst signing my job contract I was asked: ‘Which phone and computer do you want?’. ‘Out of all the models in the world?’ I remember asking myself, says Irina Nordström, the HR manager of Eficode.

The HR-worker, who took the leap from the industrial field to a software company, has also been surprised by many other things at Eficode.

- The tempo at Eficode has surprised me in both the good and bad. The decisionmaking process in the company is light, therefore there is a capacity to take action quickly. Though sometimes the tempo is so fast, that it would be beneficial to slow down for a while, stop to think, and then act after. It’s wonderful, how a quick pace can at its best, result in a job applicant getting an interview with us on the same day the application was sent. At Eficode, an employee never has to be stuck with the same questions for weeks. This is the work environment for the bit impatient which especially suits me.

The average age at Eficode is 33 years and as it is typical for the IT-industry, the majority of the workforce is male. Still, Irina feels that the work community is more diverse than ever before in her career.

- Some companies consciously recruit similar kinds of people into their teams. We at Eficode believe diversity to be an additional source of creativity. When each employee notices, it is alright to be their own kind of a person with their own interests and opinions, it is easy to feel comfortable arriving at work each day.

Irina says that, in the limits of the necessary deadlines being met on time, the employees at Eficode are given a tremendous amount of freedom on ‘how’ they execute their work.

- In addition to my day job, I also work as a group exercise instructor. At Eficode, I have always been able to fit my lessons flexibly together with my work calendar. On the other hand, I myself don’t mind pulling up the work computer occasionally at home in the evenings, when the certain type of work tasks have deadlines closing in.

It is great that there is this amount of flexibility and that it goes both ways. As it is known, freedom and responsibility go hand in hand.

Irina reminds that there is always something to improve in every organisation. At Eficode, the wishes considering the improvement of working environment are particularly current and important as Eficode keeps growing. In the personnel inquiries, especially the amount of the conference rooms and phone booths were requested to be increased. To answer to the needs of a growing company, Eficode moved to new facilities at the beginning of the year 2017. The new facilities , renovated especially for Eficode's needs, are situated in the area of Kamppi, in downtown Helsinki.

Irina points out another important aspect of improvement: feedback.

- How could we make giving feedback an even easier function as a part of our ordinary workdays? Weekly, we reward one employee, who has been praised by either a client, a superior or a colleague. Of course on top of this, we want to make sure each employee gets also enough feedback to grow on professionally, in their own important field of work.

Now, it is time for Irina to get back to work. Four new employees are arriving to the office to sign their contracts and to choose their own set of preferred work devices, just as Irina did when she started at Eficode. There is also a few job interview invitations to be sent off, before tonight’s combat-lessons. Until next time!

Eficode is constantly recruiting new, skilled professionals. Check out our open positions or send your open application straight to: careers@eficode.com. Hopefully we will see you soon!