Thomas: Life is pretty weird, I never imagined I would work in UX 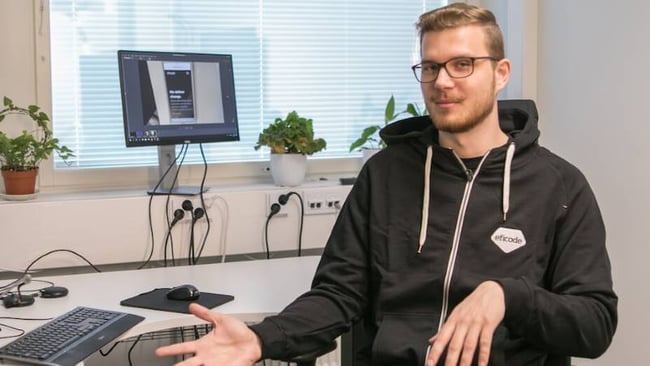 Everyone has a story to tell. Meet Thomas, a Human of Eficode. Thomas is a UX Specialist in Eficode's UX Research team.

Humans of Eficode takes a look at the lives of the humans that work at Eficode.

Meet Thomas: A UX researcher and a student

"Outside of Eficode I’m a graduate student at the University of Helsinki majoring in Cognitive Science (with usability as my Master's path). I’m interested in digital systems, which is why I got into UX in the first place. I'm also interested in AI, and I wrote my Bachelor's thesis on ethical machines. But I find all sorts of cognitive science topics fascinating too, such as language, memory, motor functions, and consciousness.

"I try to incorporate my background into my work in various ways, but it would be great to expand it even further."

"Other than that, I enjoy travel, food, music, art, film, etc. I also like teaching, and I enjoy long conversations about shallow stuff, but also about philosophy and politics, depending on the situation. I love the Finnish nature, especially the archipelago.

"I'm pretty open-minded about hobbies, and am interested in a lot of creative pursuits including programming, playing music (I prefer the piano but I play the guitar and drums as well, and am open to trying more exotic instruments as well), music production (mixing and mastering), filmmaking (cinematography, lighting, and visual effects), and digital art. I also like drawing and painting on real surfaces, but do not get the chance to do that very often anymore.

"For exercise, I prefer biking around the city (not a big fan of running though) and going to the gym when I can. It'd be nice to play a sport too, but I don't know what. Maybe a one-on-one sport such as badminton or fencing or something, as team sports feel like too much of a hassle for me personally.

"I’m not sure if I hate anything in particular (except herring and anchovies, and runny eggs). I try to see things positively. I can, however get annoyed when technology doesn’t work properly or is poorly designed, as it feels like my domain somehow. I know what good technology looks like, and it can frustrate me to see it done so poorly sometimes.

"This might be a cliched answer, but the three things I value most are my private life (friends and family), my work (Eficode), and the state of the world (political, environmental, and technological aspects)."

"I think the past me would be rather surprised"

"I’m not sure I’ve ever had a concrete dream, but in general I would like to be successful enough to be able to travel and enjoy life to the fullest, but not at the expense of my own health or anything like that. I simply want to maintain a good work-life balance, where I enjoy both my work and my free time. It makes me both happier in life and more productive at work, which is the best of both worlds.

"I think the past me would be rather surprised at where I am now. Life is pretty weird – I never imagined I would work in UX, and for the longest time I didn’t even know about the field at all, but here I am."

"What my usual day's like depends greatly. If I’m studying that day, I usually head to the university to attend lectures or work on projects or whatnot. If I have a work project going on, I usually spend the day at the Eficode office. It is quite common to have to travel between the two places during a single day as well, but I try to focus on one thing at a time as much as possible. As some of my work projects are abroad, I sometimes have to travel here and there, but usually only for a couple of days at a time.

"At Eficode, there is also a lot of flexibility both for me personally (as I work part-time while I study, flexibility in working hours is essential for me) and in the company, as all Eficodeans can freely participate in and organize all kinds of company events and trainings."

A journey with Eficode

"One of my university friends from my field had previously worked as a UX Specialist at Adage (now a part of Eficode), and tipped me about an open position there. I had been looking for a part-time job while studying at the university, and this seemed perfect for that, and within my own field on top of everything. My friend gave me her old boss’ phone number, so I called him directly to see what it was about. I met him at the office, we talked for a while, and at the end of that he offered me the position. I started working at Eficode right away, in September 2017."

"My team is great, and I love our team get-togethers when we attend museums, go mini-golfing and enjoy drinks after hours.

"What I like about Eficode is the ambition, the people, the atmosphere, the flexibility. There are a lot of great people here who are friendly and open minded. There is also a collaborative atmosphere overall, where people of different teams want to get along and work together."

"The internal openness and flexibility is also a plus– the idea that any Eficodean can participate in and organize company events or hold presentations. Also, the fact that anyone here can attend trainings and expand their expertise, and that this is actively encouraged."

The makings of a UX specialist

"Usability is one of four graduate-level areas of study within my major (cognitive science) at university. You have to choose one of them, so I chose usability because I’m interested in how systems and services are created in the private sector. I did not want to become an academic researcher, so this seemed like the perfect way to get into the private sector.

"I think cognition, meaning information-processing, is fascinating as a concept not just in humans, but in other organisms as well (both living and artificial). I was initially interested in psychology in high school, and through it I discovered cognitive science, which seemed more fitting for me.

"Cognitive science focuses less on the clinical aspects, and more on studying mental phenomena in general and modelling how minds and mental structures work together."

The makings of good UX

"I think good usability is the foundation of good UX. If a service is not sufficiently usable, it is very hard to create a good user experience, which is why usability should be the first priority. That does not mean that it is the only important thing, however, but it is the cornerstone upon which everything else, such as branding, marketing, and customer experience etc. rests.

"UX and usability as concepts do overlap to a degree – usability is often thought of as being part of UX, which is a broader concept that also includes human factors, ergonomics, accessibility, marketing etc."

"I’ve done a number of purely research projects, usually usability testing in some form, which are great. However, there was a larger project last fall and this spring that included design as well, which was especially exciting. I got a real first-hand look into the design process through the project, and got to both test the designs we created and influence the process. It was cool to work with designers, as I don’t get the opportunity to do it that often.

"Over the course of my time at Eficode, I feel that I’ve grown into a good communicator. I think that’s a crucial skill in this field, as there is a lot of human interaction involved. Both when interviewing users for research purposes and interacting with customers, it’s important that all parties understand what is being said. I find that showing genuine interest in the topic helps tremendously when communicating, as it motivates me to dig deeper and encourages the other party to do the same. The result is genuine and interesting conversations with both test participants and clients, yielding better research data and forming deeper bonds with customers.

"I’m proud of my achievements so far. Getting into my desired university program was a big deal, and I’m so proud that I studied maniacally for the entrance exams. Getting a great job in my field as a student was also great, as many do not get that kind of opportunity at least that early on.

"As I plan to graduate with a Master’s degree next year, this year my goal is to plan out my thesis and remaining courses as best as I can, so that I can finish up my studies and move on. I also want to do interesting projects at work this year (which has been occurring so far)."

The nicest thing a client has ever said

"Although I don’t do the work for the praise specifically, I always enjoy getting positive feedback from a client. After each project we usually send a project feedback form to the client for him or her to assess how we did. In one of my projects this year me and my co-worker got full marks in every category from our client, which doesn’t happen very often. I was really proud of that achievement, and our boss even specially congratulated us for it."

Thomas, a UX Specialist in Eficode's UX Research Team since 2017.

Accessibility for designers and developers 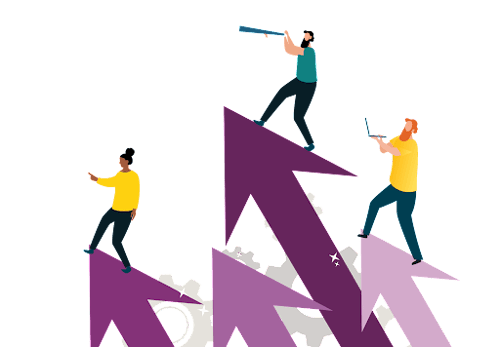 How to run an open customer interview, Detective Style