Business Finland's Dealflow database matches Finnish businesses with global investors looking for new opportunities. The database automates manual matchmaking work between companies and investors, while providing Business Finland with valuable information about companies interested in domestic and foreign investments, as well as investors and their preferences.

This brings a lot of business benefits for Business Finland, a government agency that sits under the Finnish Ministry of Employment and the Economy.

Eficode had the DevOps, Agile software development, design and UX expertise to create the product. What was there not to be optimistic about?

The honeymoon period: the Design Sprint

Next up was the Design Sprint itself, a five-step process blending design thinking and agile methodology which addresses strategic roadblocks through rapid prototyping and user research. Design Sprints result in a product roadmap. 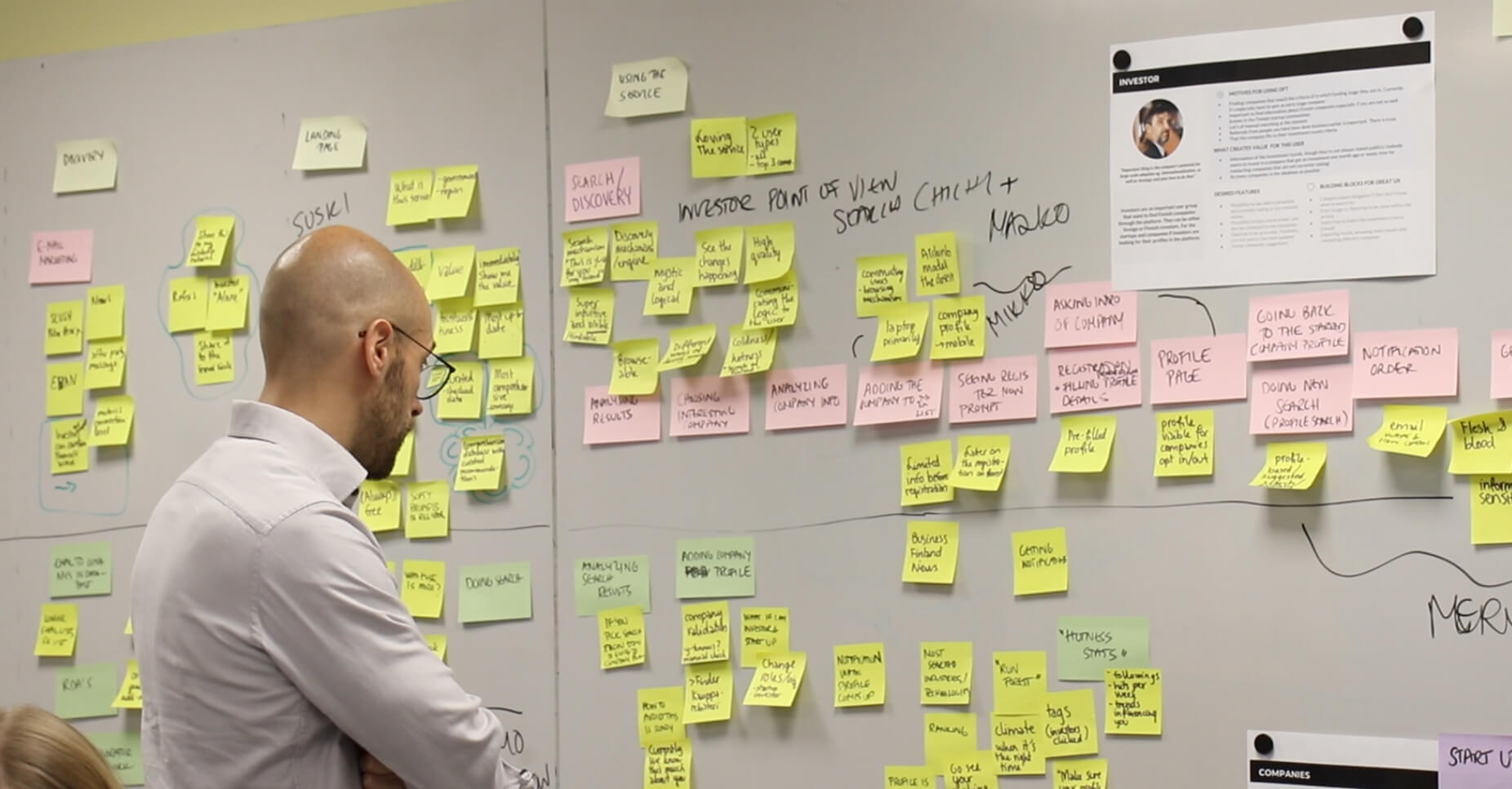 Three members of the Dealflow team came to the Eficode head office for the Design Sprint. By the end of the week, the project had an interactive prototype which had been iterated upon and tested with real investors, who gave very positive feedback.

One would think that was a solid enough foundation for a project to run smoothly.

But then reality started to hit.

It was now time to move from concept to final UI screens, based on the results from testing, and to create a proper feature plan and a roadmap for development. This iteration had to happen fast, due to a tight schedule, and details soon started emerging which complicated user flows and Jira stories.

For example, user type A needed special features added to the screen, which broke the design completely, or user B shouldn’t be shown this and that option in another screen. With a tight deadline to stick to, and with final decisions changing repeatedly over time, this was an instance where agile practices were put to the test.

It was also the first sign that the project was going to be more than either side bargained for.

A marriage on the rocks: developing the product

There was even rockier terrain up ahead. The first impasse involved the data storage solution. The one chosen for the database was difficult to say the least, and what’s more, it was linked to a legacy system that took a lot of blood, sweat and tears to wrangle.

The database wasn’t ready yet when development was due to begin, and problems getting the right data to cache plagued the project from start to finish. At this point, it became clear that that the budget allocated for the project, which was one of the few factors that wasn’t agile, was running out much faster than it should.

This wasn’t the only fire to fight on the project planning side. There were communication breakdowns with external vendors and system deliveries which put even more of a squeeze on the time developers had to work on the project.

In addition to this, the IT provider switched midway through the project which brought with it a fresh set of complications, and the hassle caused by the change stretched the budget further.

Perseverance, and a dash of automation

Still, both sides persevered. Thanks to some much-needed DevOps expertise, the Eficode team came up with solutions that solved the lack of a proper staging and testing environment for the product, implementing automated testing for various parts of the software to reduce the need for manual testing which would have slowed down the project and added to its cost.

Eficode also created a lightweight Docker swarm orchestration solution that could be used in production, which helped the eventual release of the product.

Today, the product has been out for a year and it had its ultimate test – a large spike in demand caused by Slush 2019, a world-leading startup and tech event.

What’s more, despite the ups and downs, Eficode and Business Finland are still working together on the product! Dealflow is currently being maintained and improved upon by Eficode’s Application management team.

Forgiveness in UIs and IT projects

Forgiveness can be built into a UI, giving users a way out of a process and reassuring them along the way, for example by designing an auto save function to keep a user from having to start over, or an undo function for when a user changes their mind.

When it comes to IT projects, which so often are fraught with stress, roadblocks and difficulties (even though few of those stories see the light of day), forgiveness and resilience is what will get a project to the finish line, and even see both parties working together well into the future.