Samlink speeded up its work and make decision-making structures simpler. Transparency and reporting relationships improved for employees and management.

Samlink improved operational efficiency and reduced internal bureaucracy by turning the theory behind the Scaled Agile Framework into reality.

In line with a new business strategy, Samlink embarked on operating model reform to streamline operations and reduce internal bureaucracy. Samlink wanted to use the Scaled Agile Framework as their delivery model but needed help to translate the theoretical model into practice.

Contribyte (now part of Eficode) and key people from Samlink mapped the organization’s needs and applied its knowledge and experience of the Scaled Agile Framework to discover a solution.

The result was a model to help Samlink transition from managing individual deliveries to managing larger entireties. SAFe was also integrated into the overall approach to control organization layer operation. The model improves operational transparency and the work was given to employees without them being shuffled around the job.

Although realizing the benefits of projects in the banking sector may take several years, Samlink has already been able to speed up its work and make decision-making structures simpler. Transparency has increased for both employees and management, which has reduced the number of reporting relationships.

This improved transparency has allowed Samlink to respond more quickly to future projects and needs.

Samlink and Contribyte have been working together since 2011. Samlink's net sales and earnings have grown every year since 2011.

Project results: as reported in the media

The success of this project has also been widely publicised in the media. For example, Tietoviikko praised their giant reforms in an attempt to make the whole company agile. In summary, they said, “Samlink received feedback from their customers and woke up to realize the need for change. [As a result], the company was reborn more agile this year. The software provider of the financial industry reinvented their organization, tools, and the operational model.”  Read the story from Tietoviikko (article in Finnish).

In April 2015, Samlink’s President and CEO, Pentti Unkuri, told Tivi magazine that the company will enhance its operations by changing to agile methodologies. Only eight months later, the Journal read: “Samlink made a giant reform, wanted the whole of the company agile”. In the article, Director, Sami Suuronen, discussed the inspiring, but challenging stages of the transition, explaining that, the jump to agility was made in a short time with the cooperation of Samlink employees. Read the full story from Samlink’s annual report (article in Finnish). 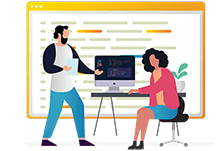