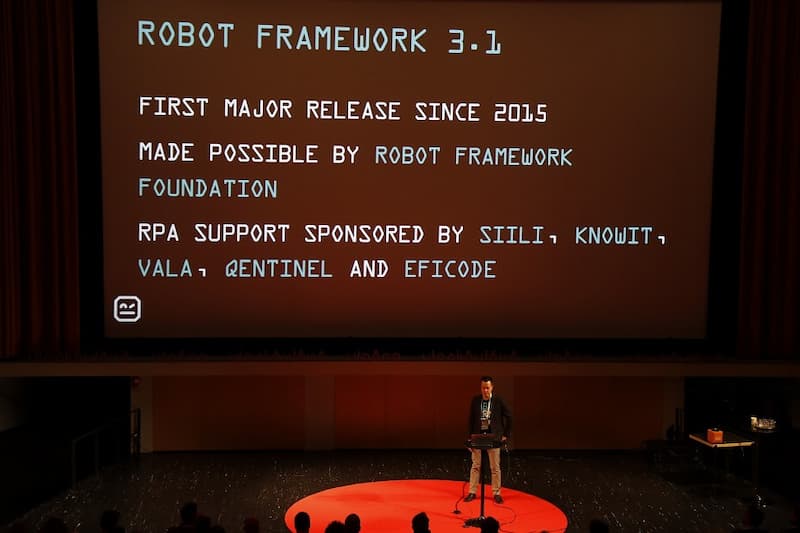 It all kicked off with several hands-on workshops on Wednesday 16 Jan. RoboCon’s main conference day was held the day after at Bio Rex followed by the sprints on the last day on Fri 18 Jan, at Eficode’s headquarters in Helsinki.

RoboCon 2019 included many cutting-edge talks. Juho Saarinen & Joonas Lehtimäki, two of Eficode’s Senior Consultants, also took the stage during the conference. Below are their presentations for you to view and enjoy!

The Evolution of a Robot Framework user – Juho Saarinen, Eficode

“The most important thing I’ve learned over 10 years of experience with test automation has been working in cross-functional teams. Over 8 years of that has been among the Robot Framework, because of its simplicity and easy way of doing things” - Juho Saarinen, Eficode

“The benefits that dynamic & scalable test automation environments can bring are huge! Open Source technologies like Zalenium help organizations to unify their test environments, cut off their costs and bring extra features to the table” - Joonas Lehtimäki, Eficode

After the conference & after party, around 35 participants gathered at Eficode to contribute to existing projects in Robot Framework ecosystem by developing & coding. The day was a success, with the outcome of two new projects, several merged pull requests in different projects, and a sauna session to relax and network in a Scandinavian manner with other Robot Framework users and developers.

Eficodeans also contributed to projects they maintain: Juho (mentioned earlier) worked on a new version of Java port of SeleniumLibrary whichs release was prepared on friday & tried to solve OCR dependency issues, while Aleksi made great headway for the next release of Jenkins plugin.

“The Sprints gathers people with different backgrounds and needs to solve common issues. Even though the overall velocity in an open source sprint is not that magnificent, it’s a great place to get new ideas and meet others who just want to make the tool better in general.” - Aleksi Simell, Senior Consultant at Eficode